Our Team has over 20 years experience in the Golf Industry, we advise Private Owners, Fund & Asset Managers, Financial Institutions, Investors, Owners and Lenders. In the Republic of Croatia for the first time now, our group offers the first trained professionals from the world’s most prestigious golf universities (Les Roches) who are ready to carry out and lead the most demanding golf projects. We are developing golf as our tourism branch, which will turn Croatia into a true golf destination.

Our Concierge Investments Team was created to ensure that our existing and new clients can feel safe when buying or investing in Croatia or abroad with Antropoti Real Estate & Investment Concierge company.

Whether you are looking to investment with golf products such as golf apartments, plots, villas or even new build villas, golf development, other golf related products such as golf buggies, golf shares & memberships up to large investors or groups for entire Golf projects or developments with high yields abroad or seeking pure investment opportunities, receiving the best financial advice is essential.

Our experts will be ready to answer any questions you may have about designing, obtaining permits, golf and environmental studies, construction innovations, and any investor wishes.

For all Golf Service customers that would like to buy or invest in a golf front residence, our team will find the desired location and put you together with our team of professionals & collaborators in the purchasing chain.

We Stay At Your Service.

Istria is the largest peninsula in the Adriatic Sea. The peninsula is located at the head of the Adriatic between the Gulf of Trieste and the Kvarner Gulf. It is shared by three countries: Croatia, Slovenia, and Italy. Croatia encapsulates most of the Istrian peninsula with its Istria County (Regione istriana in Italian).

Istra – Sometimes called the ‘new Tuscany’ as it really reminds of, with a landscape of green rolling hills, drowned valleys and fertile plains, gastronomy and traditions connected into one.
The authentic atmosphere of Istrian towns, Pazin is the administrative capital of the region, while coastal Pula, with its thriving shipyard and Roman amphitheatre, is the economic centre, the coast centers on the fishing village of Rovinj, the ancient Roman town of Poreč, town castles like Motovun, Grožnjan, Buzet, Oprtalj, Pican, and others with history over 1000 years in the past are the most visited places from tourists from all over the world.

The region has traditionally been ethnically mixed. Under Austrian rule in the 19th century, it included a large population of Italians, Croats, Slovenes and some Istro-Romanians, Serbs and Montenegrins; however, official statistics in those times did not show those nationalities as they do today.

In 1910, the ethnic and linguistic composition was completely mixed. According to the Austrian census results (Istria included here parts of the Karst and Liburnia which are not really part of Istria and excluded ancient Istrian parts, like Trieste), out of 404,309 inhabitants in Istria, 168,116 (41.6%) spoke Serbo-Croatian, 147,416 (36.5%) spoke Italian, 55,365 (13.7%) spoke Slovene, 13,279 (3.3%) spoke German, 882 (0.2%) spoke Istro-Romanian, 2,116 (0.5%) spoke other languages and 17,135 (4.2%) were non-citizens, which had not been asked for their language of communication. During the last decades of the Habsburg dynasty the coast of Istria profited from tourism within the Empire. Generally speaking, Italians lived on the coast and in the inland cities of northern Istria, while Croats and Slovenes lived in the eastern and southeastern inland parts of the countryside.

In the second half of the 19th century a clash of new ideological movements, Italian irredentism (which claimed Trieste and Istria) and Slovene and Croatian nationalism (developing individual identities in some quarters while seeking to unite in a Southern Slav identity in others), resulted in growing ethnic conflict between Italians on one side and Slovenes and Croats on the other side. This was intertwined with class conflict, as inhabitants of Istrian towns were mostly Italian, while Croats and Slovenes largely lived out in the eastern countryside.

The Croatian word for the Istrians is Istrani, or Istrijani, the latter being in the local Chakavian dialect. The term Istrani is also used in Slovenia. The Italian word for the Istrians is Istriani and today the Italian minority is organized in many towns and consists officially of around 45,000 inhabitants. The Istrian county in Croatia is bilingual, as are large parts of Slovenian Istria. Every citizen has the right to speak either Italian or Croatian (Slovene in Slovenian Istria and Italian in the town of Koper/Capodistria, Piran/Pirano, Portorož/Portorose and Izola/Isola d’Istria) in public administration or in court. Furthermore, Istria is a supranational European Region that includes Italian, Slovenian and Croatian Istria. 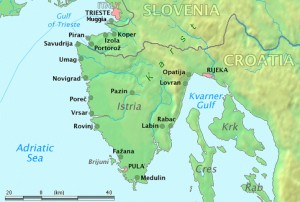