About The Jelsa Project

It is ready to built and licenses are residential. It is possible to build about 10 villas with pools.

Second recommendation is the land located 500 sqm from the center of historic town of Jelsa, on sandy Mina beach. It is 11.600 sqm residential land, out of which 10.000 sqm is buildable land. As it is situated right above the beach and close to town, it is ideal for villas and/or apartments.

About The Hvar Bay Project

About Island of Hvar

The island of Hvar (pronounced [xv̞âːr]) is located in the Adriatic Sea, off the Dalmatian coast, lying between the islands of Brač, Vis and Korčula. To the north, the island of Brač lies across the Hvar Channel (Hvarski kanal), to the west is Vis, separated by the Vis Channel, and to the south Korčula lies across the Korčula Channel, while the Pelješac Peninsula is across the Neretva Channel. The eastern end of Hvar is just 6 kilometres (3.7 mi) from the mainland. Along the southern coast of the island there are several smaller islands, notably the Paklinski islands at the western end and Šćedro island, while Zečevo island lies off the north coast.

Hvar (city) is the largest town on the island, for many years an independent commune and major naval base of the Venetian Empire. Hvar municipality includes the settlements of Brusje, Velo Grablje, Milna and Sveta Nedilja.

Stari Grad, also on the north part of the island, is the site of one of the first permanent settlements on the Adriatic islands during Antiquity. Today, Stari Grad is the main seaport on the island; most visitors arrive here via car ferries from Split. Stari Grad municipality includes the settlements of Dol, Rudina, Selca and Vrbanj.

Sućuraj is a small town on the eastern end of the island, nearest to the mainland, where a regular car ferry service connects the island with the town of Drvenik. Sućuraj municipality includes the mainly agricultural communities in the eastern part of the island.

The climate of Hvar is hot-summer Mediterranean (Csa in the Köppen climate classification), mostly bare with woody scrub at higher, steeper elevations, turning to pine forests on the lower slopes with Holm oak, Aleppo pines and Black pines. It has mild winters and hot summers. The yearly average air temperature is 16 °C (61 °F), 703 mm (27.7 in) of precipitation fall on Hvar on average every year and the town has a total of 2800 sunshine hours per year. For comparison Hvar has an average of 7.7 sunshine hours per day while Dubrovnik has 7.2.

The sea temperatures average from the lowest readings in February of 14 °C (57 °F) to their warmest during summer, when the sea temperatures usually stay between 23 °C (73 °F) to 27 °C (81 °F). The Köppen Climate Classification subtype for this climate is “Csa” (Mediterranean Climate). 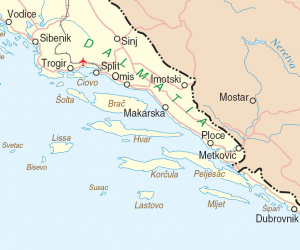 Residents of Hvar mostly work in the fishing and tourism industries. Hvar has a very mild Mediterranean climate, beautiful beaches and Mediterranean vegetation that make it one of the most attractive tourist centers in Europe. The island promotes itself as “the sunniest spot in Europe”, with over 2715 hours of sunlight in an average year.

Hvar town is the main tourist center. It features a large public square (St Stephen’s Square/trg Sv. Stjepana) that is open to the sea. During the tourist season, the port is filled with large yachts. All-night discos attract large crowds of young visitors.

Another major economic activity is the cultivation of lavender, used for aromatic oils and soaps. Hvar is often called the “island of lavender”.

Hvar is also one of the two most famous winemaking zones in Croatia. Vineyards on the southern side of the island are famous for red wines produced from the Plavac Mali grape. The central plain between Stari Grad and Jelsa is famous for its white wines.

With its growing reputation as a luxury island and billed at the new St. Tropez, high end tourists are often looking at flight options into the island of Hvar.  On the island of Hvar is an air strip – Sport airport (LDSH).