About Stone House With The Sea & Mountain View

AUTHENTIC OLD STONE HOUSE (2 DOUBLE HOUSES) with the sea view (1st and 2nd floor) and from the other a view of the mountain, 350 sqm walking distance from the sea, school, pharmacy, supermarket, post office, restaurant.  Suitable for tourism or living.

About The Villa and The Winery in Kaštel Novi Project

The The Villa and The Winery Project | Kaštel Novi – Croatia

Family vineyard with project documentation for the villa and the winery in Kaštel Novi – Bijaći with a beautiful view of the bay of Kaštela. Vineyard with cca.7.000 vines (varieties: plavac, posip and crljenak).
Olive tree cca.50 trees planted along the edges of vineyards
Connected to city water, and electricity current at the connection stage (paid connection The irrigation system.

In the process of obtaining project documentation for 2 objects:

WINERY surface cca.250 sqm
within which the production space is planned, as well as the space for the reception of guests and the tasting room

Split is the second-largest city of Croatia and the largest city of the region of Dalmatia, and one of the most popular and most visited tourist destinations on the Adriatic. It lies on the eastern shore of the Adriatic Sea and is spread over a central peninsula and its surroundings. An intrarregional transport hub and popular tourist destination, the city is linked to the Adriatic islands and the Apennine peninsula. The city was founded as the Greek colony of Aspálathos in the 3rd or 2nd century BC and later on was home to Diocletian’s Palace, built for the Roman emperor in AD 305. It became a prominent settlement around 650 when it succeeded the ancient capital of the Roman province of Dalmatia, Salona.

It is rich with historical cultural sites, such as: the Diocletian’s palace – the heart of Split, Iron gate, statue of Gregory of Nin, St.Duje cathedral, St. Frane cathedral, St. Petar concathedral, Peristil, St. Ante convent and numerous others.

Split is an important transport center for Dalmatia and the wider region. In addition to the Zagreb-Split freeway (A1), all the road traffic along the Adriatic coast on the route Rijeka–Dubrovnik (Adriatic Highway) flows through the city. The city also has a series of expressways and avenues, enabling efficient, fast transit by car around the city and its suburbs. The most important mean of transport in Split is bus, the city being unsuitable for trams due to its hilly geography.

Split is also the southernmost integrated point of the Croatian Railway network. Within Split’s city centre, railway traffic passes two tunnels before reaching the Central Station. The line to Split is unremarkable; a journey from Split to Zagreb or Rijeka takes around 5 hours, as the line is unelectrified and consists of only one track. Currently, there are no definite plans to upgrade the line, but with the start of work on the new Zagreb-Rijeka railway line in October 2007. The Split Suburban Railway network opened in early December 2006. It currently has one line, running from the Split city harbour to Kaštel Stari. The line is expected to get a second track and be fully electrified in the near future. New, low-floor trains are expected to be implemented as well. This line will also be lengthened, to encompass the aforementioned Split International Airport, and continue on to the towns of Trogir and Seget Donji. Split also plans to construct a mini-metro that in future.

The Split Airport in Kaštela is the second largest in Croatia in terms of passenger numbers (2,818,176 in 2017), with year-round services to Zagreb, Rome, Munich, Stuttgart, Frankfurt and the Cologne Bonn Airport in Germany, as well as heavy tourist traffic in the summer. The airport is located about 20 km west of Split.

The Port of Split, with its annual traffic of 4 million passengers, is the third busiest port in the Mediterranean, with daily coastal routes to Rijeka, Dubrovnik, and Ancona in Italy. During the summer season Split is connected with other Italian cities as well, such as Pescara. Most of the central Dalmatian islands are only reachable via the Split harbor (with Jadrolinija and Split Tours ferries). This includes the islands of Brač, Hvar and Šolta, as well as the more distant Vis, Korčula and Lastovo. Split is also becoming a major cruise ship destination, with over 260 ship visits, carrying 130,000 passengers. The largest ship scheduled to dock is the 315 m long Celebrity Eclipse. 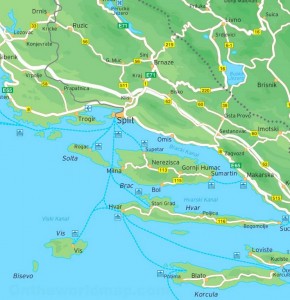 Kastel Novi is one of the seven Kastels, all of which constitute the town of Kastela.

Kaštel Novi was founded in 1512 after Antun Cippico, a Trogir nobleman, built a fortified summerhouse, as well as a town for its peasants.

The town of Kaštela is located on the coast of the Bay of Kaštela. It has over 40,000 inhabitants, and it is the second-largest town in the Split and Dalmatia County. It stretches over the length of 17 kilometers. The town developed around seven settlements or around castles. Kaštel Novi is the sixth of seven kastels from East.